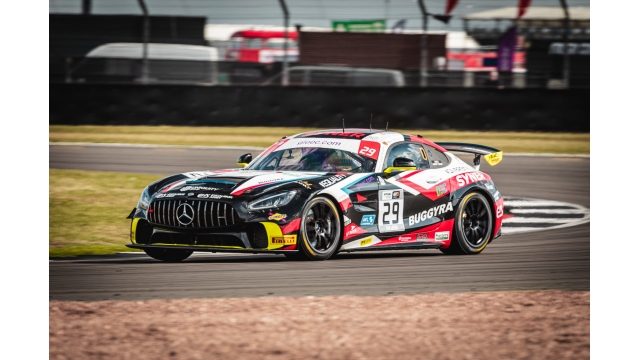 At Ledenon circuit Aliyyah will have as a team partner her mentor David Vrecky.

18-years-old driver again shows, how versatile is. Racing ??triple wrestle” started at Silverstone in GT4 race, last weekend she sat into EuroNASCAR vehicle. And now she will return with GT4 car in France.

??It will be for Aliyyah as much racing as possible. She can only improve on the track and in the middle of fights. FFSA GT4 championship offers door to door racing, where she has to watch out for back and also follow action in front of her car. It’s great racing school,” reminded Buggyra team principal Martin Koloc.

In Most Aliyyah Koloc scored her best results in EuroNASCAR so far, that’s why she is in a very good shape. Most was marvellous. She feel in a good form. She likes racing in GT4 car so much. She has to be all time on the alert and able to avoid possible accidents. Even Ledenon is not very well-known circuit, it offers very interesting racing opportunity.

For her and David Vrecky it will be racing debut at circuit situated in Occitania region in south western France. But both drivers became familiar with the circuit during summer tests. In addition, drills on the simulator are already a common part of preparation for Buggyra pilots.

??For example we ran over more than 100 laps in simulator before Silverstone. It’s a great thing for setting up a car, too. We can try different variants of set up and be ready for the race,” explained two time European champion of truck racing.

Mir Lakhmir Baloch Zamurani; A Crypto Millionaire and CEO of Mir Sons and Co, Supporting The Needy in Balochistan, Pakistan.